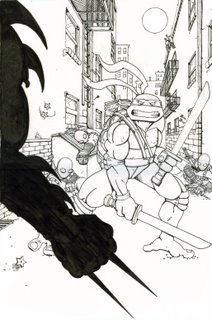 So for the last while I've been putting together a portfolio for Mirage studios. This is one of the cover page drawings I have done for said portfolio. The ninja turtles were for me prolly my biggest early influence. I remember getting the how to draw T.M.N.T comic that Eastman and Laird put out when I was really young. I used to copy drawings out of it all the time. Anways this image is inspired by an early issue of the ninja turtles that most of the first movie was based on. In it the turtles are preparing for Christmas at Aprils and Leonardo goes out for a jog on New yorks rooftops. Anyways he is ambushed by the Foot clan and tears through them. The foot retreat and Leonardo follows and walks into a trap. He ends up getting his ass kicked by Shredder and the foot and delivered back to Aprils house through the window. Those first 20 issues of T.M.N.T were nuts. Anyways I actually did this one like nine months ago and I see a lot of problems with it now that I didnt at the time. I might post more pages of the portfolio later. I have two story pages that go along with this cover. Anyways Excelsior or whatever.
Posted by Brian Evinou at 9:28 PM

dude..turtles in a half-shell..turtle power! Sweet man..I like it! I loved the turtles too dude...are you still sending out this portfolio with the new and all or no? Talk to you soon man!

Sick Turtle, Brian! Laird may have an heir...