Draw yourself as a Street Fighter character? 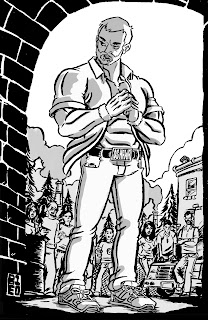 So my good buddy JR is running this thing for the Station Gallery in Whitby called 40 Random acts of art. I guess he thinks up challenges for people, they do em, then they put em up in thier gallery. The above is the result of my challenge. I was looking at the Jim Rugg drawing the SF tribute book and thinking of maybe being clever with the challenge, but then I said F it. Its my week off. Leave the clever shit to the Educated elite. I'm going for the meat head MMA demographic.

The first season of Ugly Americans has wrapped. I am currently in the process of enjoying a week off work. I am drawing pictures and working on a short comic tentativily called Fight song. It is the dumbest book I've ever done. But I only have a week off and didn't have enough of my next big epic comic planned to start so this is what I work on. Also the reasons in the previous paragraph. Seriously, I watched showdown in Little Tokyo yesterday while working on this thing. Its almost as dumb as that movie.

Also Word on the Street is this weekend in Queens Park, come visit me and I will show you pages of Fight Song! Prepare to lose brain cells!
Posted by Brian Evinou at 5:29 PM

dude! representing capcom!! You look like you've been hitting the gym pretty hard man, nice drawing. I dig.
I'm going to try to hit Word on the Street this year, have always wanted to go. I may or may not say hi.