This was going to be Namor, then Richard Alpert. Now? 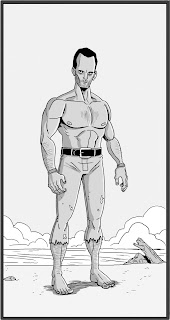 Hello! Yesterday was the Canzine! Sad news, I have no photos from the show. Good news, the show was fantastic. We {Noel Tauzon and I} were initially assigned a shitty table in the north room. Reaching into the Nth dimension and twisting reality just a little resulted in our being moved into the main hall beside Toronto comic royalty Erik Kim, Kean Soo and across from Indie darlings Vicki Nerino, Britt Wilson and visiting vagabond Phil McAndrew. The stage was set and a great show was had, by myself and Noel at least, hopefully for others as well.

Shouts out to all the beautiful people who stopped by and bought comics. You are indeed the most handsome of comic fans. Loyal blog visitor Anthony Tam, you the man.

Comic Jam contest from previous post update- I won!!! I get a cool illustrated Frankenstien book for the win. Its illustrated by comic horror veteran Bernie Wrightson. It is one of the definitive books that Frankenstiens monsters look is based on.

I have the next month off it looks like. Work has wrapped and we have short break until the next thing gets going. I will be using this time to work on my next mini, it is going to be called Fight Song. It will be a collection of two different fight comics I've started over the last two months. They are both ten pages in and will each prolly hit the twenty to thirty range. Watch for it! Thanks again for stopping by loyal bloggers, see you soon.
Posted by Brian Evinou at 11:25 AM

It was good to meet you at Canzine, Brian.

Enjoy my video from Canzine with your cameo in it! http://www.youtube.com/watch?v=6CRp0F1IvP4