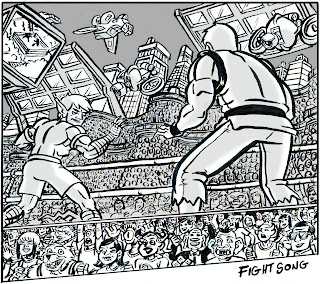 Hey guys, this is a preview of my next book FightSong! Its going to be a mini with two separate stories in it. Here are two panels from the first story. The pencils are done and I started inking it yesterday. This story weighs in at 22 pages. The other story is stuck at 10 pages penciled with at least another ten to go. Anyways, I guess the point is, that my next book for you guys will be a quite a bit fatter than Noway Jose and Don River.

In other news my website is super close to launching. Its actually already up but there are a couple things that need to be fixed before I announce it for public consumption. There are a couple tasty things I can tell you about it though.
1.It will be updating three times a week. Mon, Wed, Fri
2. The first comic on it will be the project previously known as Jim and Jenn.
3. The project previously known as Jim and Jenn has been buffed up as well, theres now tones and some of the earlier pages have been fixed up digitally for a sexy new experience.

hey Brian looking good. Like the amount of work into this shot with the full crowd. Also excited you have your website coming up soon. can't wait to see it!

Thanks dude. Think its starting to come together. The entire comic is rocking those crowds. It is taking for ever!