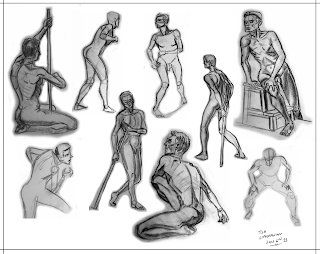 Back on the life drawing trail after a nice holidays. Posting for 2011 commence!

For me, I will just throw down my favs of this year.

Tumor by my hombre Noel Tuazon and Fialkov. A dirty crime drama stinking so good of Noels distinctive inking style. Also a very nice printed book. Some sweet paper in this badboy.
Scott Pilgrim Vol 6 by O'Malley. A satisfying conclusion to the series that got me back into comics in a hard way. Great work and shouldn't be missed.
The Outfit by Darwyn Cooke. Dang, this Parker series keeps getting better. Darwyn kills it with his two tone stylings.
Super Pro Ko by Jarrett Williams. This was a nice surprise for me. Super fun Wrestling fun. Beautiful simple artwork inside. Very fun.
Koko be good by Jen Wang. First Second nails a winner with Jen Wang's first full length comic. Beautifully print quality is rewarded with fantastic watercolor comic, about coming to terms with oneself.
20th Century boys by Nokia Ursawa. This comic continues to rule. Ursawa mastery of suspense and ability to draw the most minute of expressions is incredible.
Afrodisiac by Jim Rugg. Jim Rugg is a super hero of comics. Hilarious.
Wilson by Daniel Clowes. What did you expect, its Clowes. This one is pretty mean, but also hilarious.
X'd out by Charles Burns. Typically wicked, Burns nails it. Is this a series or a one shot? It seems to be book one but I read a couple reviews that suggested its a one shot. I hope not. Great start?

I continue to purchase Walking Dead and Invincible. They are both great. This year allowed a few more into my rotation. Its all image.
Orc Stain, James Stokoe premiered his fantastic fantasy comic this year. Hilarious, fun, beautiful.
King City by Brandon Grahm. Full of puns hilarity adventure and excitment. Grahms simple unique style is dripping charm.
Skullkickers by Jim Zubkavich. A hell of a good time. Fantasy with highend fun. Great drawing and tight dialouge. Craaazy fun comics.

Manly guys doing manly things,Kelly Turnbill- I met Kelly working on Ugly Americans. She is the best. Her comic is just as good.
Deep Down, Alex Diochen- Another coworker on Ugly. Alex has been fighting the Zuda fight for a few years now. He just recently launched his new comic Deep Down. So far its been one wicked fight scene. I can get on board with that.
Peeling Onions by Lezley Davidson- Slice of life auto bio comics. A thick slice of comedy and heart from Toronto own LD
And here are a list of other classics I'm continuing to love.

dude, your work is da bomb.