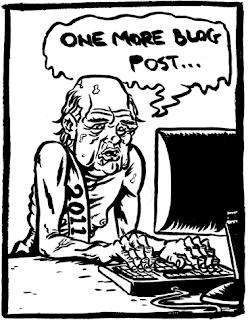 2011 is on it's last gasp! That means it's that time of year again where I look back on the year in comics and tell you all about some of my favs! Hopefully this will shine some light on some deserving souls, there is always more comics to be sold! I peer pressure you to go out and buy all these books! NOW! GO!

Old City Blues by Giannis Milonogiannis This is an awesome cyber punk whodunnit book starring awesome mechs and beautiful cars set in a near future Greece. Giannis is a crazy talented guy and he is also super young..so that is scary.

Pope Hats #2 by Ethan Riley PopeHats 2 guys! Man, Ethan Riley can sure draw. This book is such a pleasure to look at and then you read it and realize he is just as strong at writing as well. Great book.

King City by Brandon Graham Brandon Graham has a real inspiring individuality to his work. Every page is jammed full of puns, pretty ladies and funny dialogue. Under all that though is a really good story about growing up and making your own decisions.

Orc Stain by James Stokoe Orc Stain is awesome. So unique looking and the story and genre have never been done this way either. This is a long epic story that is being set up, hopefully it gets back to a good release sched in the new year. I miss my gronches!

Anya's Ghost by Vera Brosgol This is Vera Brosgol's premiere book. I have been a fan of her since she put her Grad film Snow-bo online seven or eight years ago..since then she has had her work in the Flight Anthologies and posted a long stream of awesome work online. Anya's Ghost is a spooky story of a russian girl in an american highschool with her unfriendly ghost. As with a lot of her work it takes a pretty twisted turn towards the end. Great book and apparently YA friendly!

Remake 2 by Lamar Abrams Lamar Abrams followup to the original remake continues to please. Funny, well drawn and irreverent, Remake is a love letter to fart jokes and Megaman

Even the Giants by Jesse Jacobs Jesse's work is very unique looking he uses two tones and leans on isometric perspective. The stories are down right weird too. The book has two main narratives, one about two giants living in the Arctic and another about two really creepy looking brothers jumping around a surreal anti reality. Fun book, check it out!

20th Century Boys by Naoki Urasawa Urasawa was on my list last year. I am a big fan, 20th Century boys I believe wraps in 2012, this will be sad. A hell of a series with beautiful art and excellent characterization.

Wolves by Becky Cloonan Becky Cloonan is one of my favs, her inks are so black and smooth and her artistic sensibilites are really close in line to what I wish I could produce. Wolves takes all those things that I already love about her work and then jumps into my fav genre fantasy/horror. She couldn't do wrong.

Lose #3 by Michael Deforge Deforge is indie comics belle of the ball for a reason. Lose is awesome, twisted, unique and funny. Track down these books. They rad.

So that's it for this year. There are a bunch of other comics I love out there but the list was already getting long.. So go out there read these books and read thier favorites to find even more good stuff! Comics rule and so can you!

Also, Fight Song! My webcomic continues, check it out dogz!
Posted by Brian Evinou at 3:21 PM