Woo Hah, gotcha all in check. 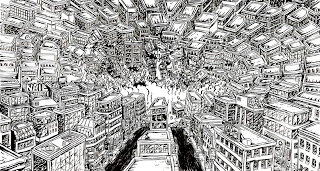 So, what is this drawing from? It is from a forthcoming book of mine..Not my new book which will hopefully be released at Kazoo, but assuredly at TCAF...another one.

This past weekend was the Toronto Comic Con! What a great time. I shared a table with Friendly Phil McClory, we came, we saw, we conquered. I had a great time hanging with lots of comic pals. Had a great dinner With Friendly Phil, Adam Gorham, Fred Kennedy and Andre Fernandez. They are putting out some fun books over at Big Sexy Comics, so check that out too. We were lucky enough to sit right across from Becky Cloonan and Andy B. Those two got some awesome work coming up. Becky showed off her pencils for a forthcoming issue of Conan. Andy had some of his work for his forthcoming Black CHurch project. Really innovative stuff! It was berserk.

Just yesterday I got to meet one of my biggest heroes. George RR Martin. He did a "Meet the author" thing at Tiff. It was awesome. I've seen him speak in interviews countless times but seeing it live is a different thing. He is a real charming man. Hilarious, insightful and thoughful. After an abbreviated Q&A, the real action happened! Winds Of Winter reading! Victarion Chapter! WHAT WHAT! Anyhow..it was awesome. I got some books signed and a photo of me hamming it up while the legend signs my book..see below! That is a thrilled Brian Evinou. 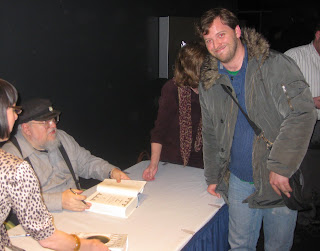