So I havent really been drawing too much lately. These are just a few things from my sketchbook. Nothing is exactly finished but I've been feeling bad about not posting lately so I wanted to get something on here. I've just started on the next batch of seven pages for my comic, hopefully those will be up within a few weeks. ....Im sooo slow. 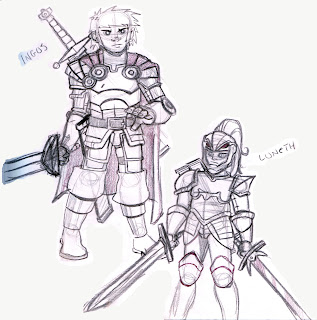 These are two of the lead characters from the remake of final fantasy 3 for the DS. The job system in the game is good times. These are a knight on the right and the other is a darknight. 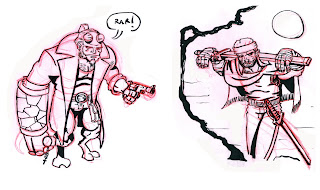 So I was at Beguiling the other day picking up my books. They had all these beat up trades at the front for two bucks. One of these was Hellboy seed of destruction. I love hellboy and own a lot of single issues but no complete arcs. So picking that up inspired me to draw a wee hellboy. His legs are fucked but whatever. This other guy is from an idea I had thats never really got off the ground.

Nice work Bri. Ya posting is a bitch... it takes so much effort... I don't even remember the last time I posted. You've inspired me though maybe I'll put one up tonight. L8r!

Im definetely looking forward to seeing the next seven pages of your comic... I really want to know what happens! These pics are really awesome too.

Hey Brian, what's your e-mail? Can get me at vanilla_pisces@hotmail.com (it's Andrea) I never post stuff either