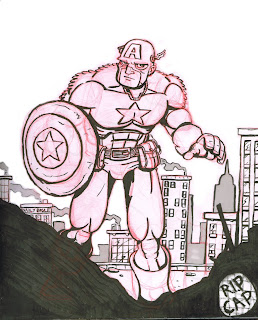 So Cap got shot, Im happy he didnt die fighting iron man in civil war. If anyone had to be behind him getting killed it had to be the red skull. I cant wait to see how it all plays out though, Cap will eventually be back obviously, its all about how we get there though. Ed Brubaker is a great writer though and Im sure will come through huge on this. 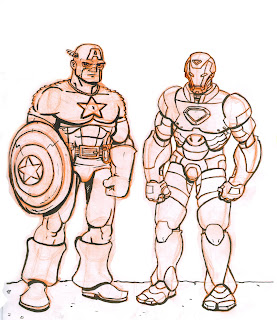 So Civil war finally ended, I, unlike most really liked it. I think there was definitly some wierd moments that were out of character but I enjoyed the ride. It did take way too long though. So obviously these are the two main jerks in the story. I honestly would of sided with iron man in this struggle, at the same time though Cap is at his best when hes standing up for the american ideal. If he wanted me on his side I mean.. who can say no to cap. 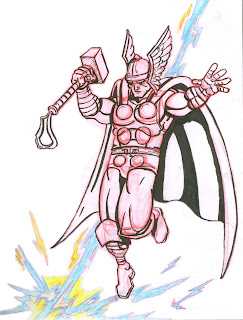 I like thor, I loved simonson's run on him when I was a kid. My fav was when his bones were brittle and he was in full asgardian battle armour fighting the midgaard serpant to prevent ragnarok. The whole issue was done in splash pages! Anyways, as fortold Thor dies at the end and ragnarok comes. Dont worry though, he came back and everything was allright. That'll happen again soon. Cuz he currently dead again. SO hes coming back.um... yeah in the spirit of Civil war lets say this isnt thor but the crazy creation of Hank Pym Tony Stark and Reed Richards, THE MIGHTY CLOR!!!!!!

Yeah the iron man in general is pretty kick ass. The Cap in the rubble came out very strong as well.