The Joss Whedon centric post. With a lil BSG. 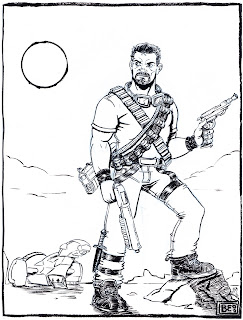 Heres that Jayne dude from Firefly. Man I love the Whedon. I wish this show got more time cause it was pretty tight. THe film was definitly the best scifi film in 2005 {I think thats when it came out} and Im not sure if theres been any films that would match it since. If you can think of any that I might of missed let me know, as I love the sci fi.
Speaking of I watched Star ship troopers 3 the other day. Its hilarious.
Anyways, look for more pinups from me in the coming weeks, as you aint seeing no Jim and Jenn. Which by the way continues to chug along. I keep adding scenes. Im a masochist.
Also heres part one of a Battlestar Galatica two parter "auto-bile" comic that costars the powers of whedon. I did this first part prolly in april or soemthing..I may not ever finish this as the second part isnt as topical as it would of been when I did the first part...it was all about how long the wait between season 4.1 and 4.2 was to be..ironically not as long as the wait for the second part of this comic...FOREVER!! 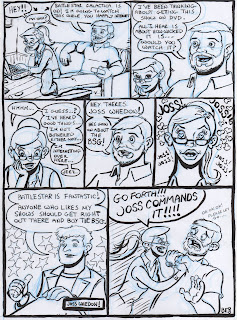 Dude that comic there is hilare. Nice stuff man , its looking good. Can't wait for the completed epic comic man.