Kaneda and reaction to that Steven Grant fella. 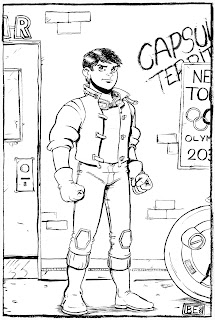 So if your not aware yet and you pay any attention to the comics media you soon will be...
http://www.comicbookresources.com/?page=article&id=19027
Steven Grant in his Permenant Damage article this week serves up his year in review 2008. Dreary. His main thrust is a lack of original ideas, that although we may of seen this year the best superman story ever, its still just a super man story. I suggest you read it, its a good article, very polarizing.
My thoughts on the article, it seems to be very DC Marvel centric. Comics may not be in a golden age but compared to any time before other than the kirby glory years or the two years that saw watchmen and dark night come out we're doing pretty freaking good. We have to remember when slogging through the newest civil war or final crisis that despite the lows of the popular superhero titles we're still in the primes of careers of some of the most exciting comics talents ever. Bryan Lee O Malley, Paul Pope, James Jean, Becky Cloonan, Faith Erin Hocks are all names that are in varying degrees of becoming household. World builders all of them. Mentioning those five is just the top of the top, any indie comics show or zine show will introduce you to any number of exciting new artist whose last ambition is to write spiderman for the rest of thier lives{not that theres anything wrong with that}. If thats not enough new and exciting for you, look to the web. Achewood, Perry Bible, Katie Beaton, Dinosaur comics, Transmission X, Scary go round, XKCD octopus pie..the list goes on and on.
Im onside with steven Grant when I go into the beguiling and I have to fight through eighteen tie in issues of secret invasion to find the newest invincible but saying that shows that with all the bad theres hope. I feel good about comics. So should you.

Having said all of that maybe I should of expanded those few years that saw Watchmen and dark knight come out to include the better part of the eighties which is how long it took to finish Akira. Katsuhiro Otomo finished two full length stories before heading into animation, Domu and Akira. Both deal with psychic powers and both are huge influences for me as will be seen in my newest book. Here is of course the protaginist of Akira, Kaneda.
Keep on keeping on Comics!
Posted by Brian Evinou at 4:07 PM