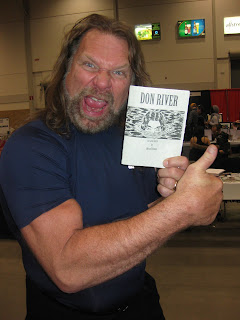 Ah Wizard World Toronto. What a strange beast you were. On the upside I met "Hacksaw" Jim Duggen. He got one of my books then came back later on to tell me how much he liked it! That is wicked! What a sweet guy. It was pretty funny, there was tons of people walking around with signed 2x4's. Every 40 minutes or so you would hear hacksaw from across the hall yelling out his trademark "HOOOO". Good times.
Other good times, almost selling out of my new book despite small amounts of people at the show. Hanging with other comic artists, in particular I would like to shout out my booth nieghbours Mike Hoffman, Evan Munday, Tyrone Macarthy, Sean Lebevre and Matt Joudrey. This show had the most comfortable seats of any convention I've been to. Also, lots of room behind the tables, some shows get a little tight. Not this one.

Negatives! Sad that the shows focus was so wild and unkempt. The advertising didnt do its job. The start times were way to early, particularly on the friday and sunday. I think its unnecasary for any show to start before noon on a sunday and especially on a friday. There was a fire alarm on the saturday right around 3, the peak time. It killed the momentum quite a bit. A lot of people were talking sabotage. Who know, I know Stan Lee was announced for hobbystar on Friday. Odd timing.
Posted by Brian Evinou at 12:19 PM

Why would Hobbystar sabotage the Wizard show? They invited us down and we were in the exhibit hall surrounded by people at the time and as inconvenienced as everyone else was. Stupid Con War BS.

And the Stan thing was announced Friday night after the contracts were signed - sure we announced after the show started so that the comics community would be abuzz with the exciting news, but there would have been no negative impact on the Wizard show attendance concerning an announcement for a show 5+ months away. I know many dealers at the Wizard show that actually benefited on Saturday and Sunday from the Stan Lee announcement as people were looking for books for him to sign.

Hey Kevin, I'm sure it was some jack ass kid who pulled the fire alarm. It was just the talk on the floor is all I'm saying. I dont think you guys need much help in any "con war" WWT was a bit of a bust after all.

Yeah, I actually had a good time when I was there, and we were joking with the Wizard folk about it as we were being taken out with everyone else.

I think that location is a bit of a bust. It didn't work when I was with Paradise, and it didn't work for Wizard either. Maybe it is time for them to consider a location by the airport, such as the Congress Centre --- it works for Anime North and they actually do get tens of thousands of people to that location.

The weather didnt help. Its on the streetcar line but you still have to walk a bit. A more focused guest list and better weather I think it would be a different story. I like to think the city can handle three good shows.

Once I'm there I really like the Direct Energy Centre. Getting there is a bit of an issue.

The Congress Centre also worked for the Canadian National Poker Expo that I went to last year. That was a pretty good location too. Kinda hard to get to for the downtown people though.