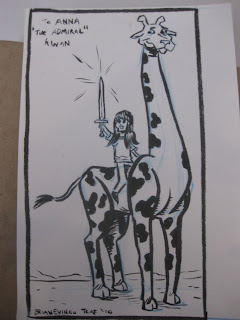 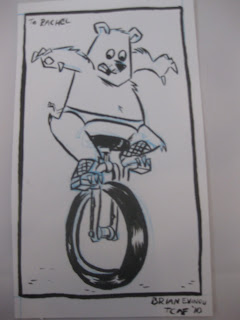 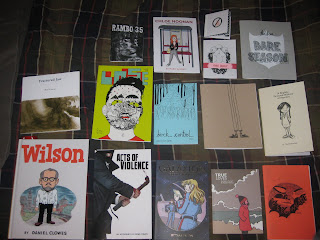 Thanks to Ab for this photo! 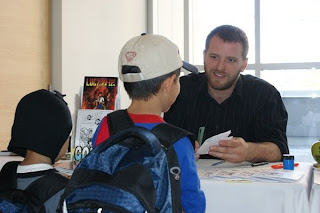 You guys, TCAF was this weekend. It ended 4 and a half hours ago as of this writing. I finally am awake enough and regained the strength to leave my bed.
What a great weekend. A hell of a show as usual. Top notch guest list, super star volunteers, wicked nice guests and a generally well run show. I was in a new area called the Small Press Schooner. It was fun. I was a little out of place in the room but I did quite well and had a blast. Sold tons of books. The crowd was there to spend money, it was nice. Of course did my free sketching as usual and had a few unusual requests, a couple of which can be found above.
The swag, oh the swag. I bought and bought. As seen above, Jim Rugg- Rambo 3.5. Marc Ellerby-Chloe Noonan, Pirates learn a thing or two about pig boy- Britt Wilson, The Ruby- Jon Chad, Ted Bear in Bare Season-Vicki Nerino, Fractured Jaw- Noel Tauzon, Lose 1- Michael Deforge, Birch Control- Laura Kenins, Feral Pizza- Phil McAndrew, A slightly Fictional History of Popcorn- Jim Zubkavich, Wilson- Daniel Clowes, Acts of Violence- New reliable Press w Ed Brisson, Galaxion- Tara Tallan, True Loves- Jason Turner, Peters Muscles- Michael Deforge.
These so far are all rad.
Posted by Brian Evinou at 9:20 PM

awesome man!! Ya, Don River is great dude. Looks like you had a great show. Cool drawings too man!

Thanks Noel! You're Fractured Jaw book is a hell of a good time too! My GF is trying to steal it.

Great stuff Brian, you are very talented. Congratulations on your successes to date and good luck in any future artistic adventures. I am your proud and impressed aunt. Your drawings are amazing.

Hi Brian - This is Kathleen, the chick for whom you drew a kick ass Dazzler at TCAF. I just sat down to email you the pic and realized your email address wasn't in the comic. Here's a link: http://tweetphoto.com/22510185
By the way, "Don River" is just about my favorite thing that I got at the show. I love it!

Love the Giraffe drawing......the bear one is cool too!