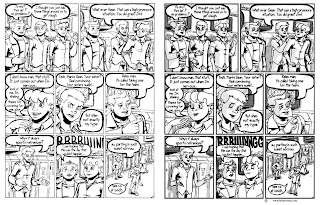 Hey guys! The big news is, my Website www.brianevinou.com is finally live. Its still under construction but its close enough now that I can show it to you guys feeling good about it!

Right now on the website I'm putting up my comic I finished a year and a half ago, called Jim and Jenn. Theres been a name change its now called Psychic Drama.

Above you'll see an example of changes I've made to the thirty pages that are currently up there. I feel a need to explain this a bit.. I'm not saying I'm going to do this amount of do over to every page but a large portion of these first 30 pages have seen this kind of facelift, I just wasn't comfortable with how they looked anymore. At a certain point the pages get good enough that I won't be making any more changes but for the next bit anyways, lots of changes. Jim and Jenn is a year and a half old, most of the first pages are more like two years old and I like to think I've improved a lot since then. So anyways, its a slightly better looking version that you guys get. I plan on posting 3 times a week. They will go up Mon Wed Fri. This comic is 120 pages long and as its finished you can count on your updates. Hope you guys like it, as I said its old. I learned a lot writing this, my apologies if its a bit clunky.
Posted by Brian Evinou at 11:04 AM