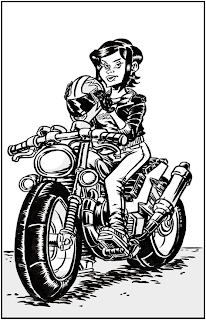 Guys! Psychic Drama is wrapped up! Hope you enjoyed it! As it was wrapping down I drew a few pics of the characters that may turn up somewhere sometime. I thought I would share one of em with you. It's Esther! She was always my fave to draw. Hope you guys like it!

Now that Psychic Drama is done, Don River is now updating on the ol website. So if you haven't had a chance to read it head on over and check it out. It is definitely B.A!

So I've been very busy. We got Canzine coming up next weekend. Come on down and say hello! I believe the second volume of Grawlix will be released there. I got a new 4 pager in there. It's pretty rad. Also I've beeen doing some silk screens..so I should have some new versions of Don River there with a sexy new silk screened cover!