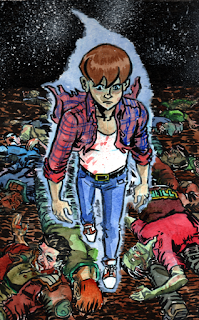 I recently was thinking of a different much darker ending to Psychic Drama. The process of making Psychic Drama was such a long one, I had practically finished it and then decided it was going all wrong so I ended up restarting it. Looking back at the original version I kind of enjoy how blood thirsty it was where as the version that is up on my website is a much more talky version. I think the happy medium was probably somewhere in the middle. Anyhow, I ain't doing that comic a third time. The ending I was thinking about features a much bleaker future for Jim where he is no longer deemed fit to be allowed out in society and is just the focus of on-going testing, kind of like the esper-kids in Akira except with more exposed brains.

Anyhoo, here is a water colour for you all. It was kind of inspired by the print ads for the "Fall of the Mutants" X-Men storyline that can be found in all Marvel comics from that era.
Posted by Brian Evinou at 1:45 AM