Where I've been and what Im doing. 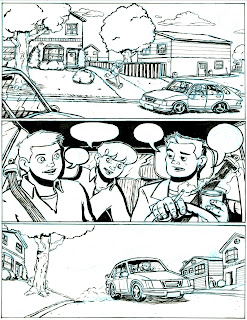 So its been a month since I've last updated. Believe I've not been idle. So yeah, I've decided as per a few posts ago my next project is the head blowing up comic, now tentativlly retitled Jim and Jenn. Its now going to be a ninety page retooled mean machine. I've been on a 2 page a week schedule for a while now and moving along. Some of the old pages are going to be retained but its mostly going to be brand new. The book will be released in May is the plan, just in time for TCAF. Also I've decided to stop posting pages online, this may change like the seasons, but for now this is your last look till completion. Theres a lot of surprises and changes in store. So yes Im super pumped about this book, stick with me and watch for it!
So untill then Im just going to be posting pinups and various other ventures. There is a 24 hour comic challenge coming up, so before the end of the month you can all expect to see a serious update..
Also word on the street was fantastic. Those I met and sketched for, thanks for stopping by! I had a great time! See you there next year with Jim and Jenn.
Posted by Brian Evinou at 12:37 AM

you're the man Bri. This looks great!
Way to go dude!